The page walks you through the complete process of setting up a testbed for wireless network emulation.
The process is split into discrete steps which partially build on previous steps.

Quicklinks to all steps:

Step 1: Familiarize yourself with our physical setup

The wireless network emulation functionality is an extension of our previous emulation
facilities sharing the physical setup and basic mechanisms. We encourage you to have a look at the architecture, our hardware and instructions on how to set up the basic system to gain a deeper understanding of the base system. Nonetheless, we provide the most important details below.

Our testbed consists of 20 Banana Pi Routers (BPI-R1, also called Lamobo R1) which
are in two subnets at the same time. One subnet is for emulation purposes, the other
one is for management and logging. The subnets are organized as star topology,
which can be modified (restricted) to resemble an arbitrary network topology consisting of links
with different characteristics like bandwidth, delay and loss (using iptables, tc-tbf and netem).
A dedicated gateway server manages the emulation process, collects the logs and serves as a gateway
for the BananaPi Routers (which are from now on called nodes).

Step 2: Perform a basic setup of the gateway server and nodes

Although we use BananaPi-R1s, the emulation framework is not bound to a specific set of hardware.
The nodes should be able to be in two networks at the same time (e.g. have two physical network
interfaces) in order to be able to use the framework without modifications.
We insist on Linux because of the Linux tools that are used in the emulation process.
If your nodes are BananaPi-R1s, you can use the system images we provide in our download section. Our download section additionally provides links to GitHub repositories containing the newest version of the emulation framework (+ example scenarios) as well as an artifacts bundle with the code/results used in the work on the conference paper.

We recommend setting up the gateway and two nodes using this step by step guide, performing a test emulation and once satisfied, creating a system image of one of the nodes for replication amongst all other nodes. This should save time and act as backup while ensuring a homogeneous working environment on all nodes.

Step 3: Set up the gateway server

The gateway server is running Ubuntu 16.04 LTS. All listings are tested to work with this OS/version, but very well might work also with other or newer distributions.

To ease and automate the installation process, we will be using the lightweight open source configuration management tool Ansible.

We additionally recommend creating and deploying an SSH-key as to access the nodes from the gateway server more easily.

Next, install git and clone a repository containing the Ansible setup scripts.
We choose ~/emulation to be the parent directory for all emulation-related files.

Change the file hosts to correspond to your network setup.

As mentioned above, the user on our nodes is called nfd, if this differs from your setup, please change the following files accordingly:

You may test the connection by entering the platform directory and issuing:

We now use Ansible to install all necessary packages.

The emulation library (emulation_lib) on the gateway server needs some Python3 libraries, which can be set up easily using a virtual environment.

Additionally, the location of the emulation_lib must be added to the $PYTHONPATH
environment variable prior to launching emulations. A non persistent way of doing
this is issuing:

Step 4: Set up the nodes

We will be using Ansible for this part as well. Run one of the following playbooks and provide the sudo password for the nodes. Many of the example-scenarios depend on udperf applications to be installed on the nodes (a custom traffic generator akin to Iperf), if you wish to execute these, please execute playbook_nodes_plus_udperf.yml.

Additionally, some changes to the /etc/sudoers file on the nodes are necessary in order to be able to call the following commands without providing the appropriate sudo password for the user nfd (Users of the OS Raspbian usually do not have to do this, as Raspbian runs all programs requesting elevated privileges as such without asking for passwords.)

The application cmdscheduler on the nodes is a vital part of the emulation framework.
You may test the basic operational capability of the cmdscheduler by logging in on any node and performing:

You may perform a preliminary test of the installation by executing test.sh on one of the nodes.

If you intend to use link command backends which utilize IFBs (Intermediate Functional Blocks, an advanced feature), you have to ensure that at least one IFB-device (ifb0) is loaded / usable before starting the emulations. To check if the IFB module can be loaded, try to run test_ifb.sh with sudo.

Step 5: Set up time synchronization between the gateway and nodes

In order for the emulation to work properly, the system clocks of the nodes have to be synchronized with the one of the gateway server. The folder emulation_lib-example-scenarios/timesync_setup contains the instructions and config files of our setup.

This time synchronization is intended to be used in a Local Area Network and with the gateway server acting as a local time server. We use the modern NTP implementation chrony.

Be sure to get chrony in version 3.1-5 or up (the provided config files are based on this version).
You may want to remove the possibly preinstalled NTP daemon from the nodes:

Create a copy of the default chrony configuration file on the gateway server and the nodes:

Modify the config files to suit your network (see examples further below) and update / replace the default configuration with the modified configurations:

Logged in on a node, you may check the status of the timesync using:

Examples of chrony configuration files for the gateway server and the nodes:

Note that we entered no timeserver for the gateway server as to avoid occasional (micro) jumps in the gateway server’s time and with it a need for the nodes to adapt. No problem, if you choose to handle this differently.

Step 6: Read up on the technical background

A scenario file (as showcased in the next step) describes a whole emulation, it is a normal Python3 source file and utilizes the emulation_lib to perform individual emulation runs. All instructions ultimately boil down to commands of two types.

In order to improve the reusability and abstract away complexity, the ultimate creation of these commands is performed by so called function blocks (also called blocks). Users can use function blocks (simply python classes) as a “more friendly” interface of command creation with the added benefit of built-in intelligence of those blocks (~ class concept in object oriented programming). Blocks (can) know what configuration files are needed where, they know what to do (commands to achieve something) and they know what results should be gathered from where. Function blocks are always assigned to nodes for which they create the commands.

When starting an emulation run, all applications/blocks that are part of the emulation are asked to (re-)generate and add their commands to the nodes they are assigned to (user commands/results are never automatically reset). The intermediate files of the network blocks are copied to the output directory, renamed to match actual nodes and possibly modified by a preprocessing step (means of e.g. mirroring intermediate files). The “link commands” and “other event commands” (e.g. created by application blocks) are merged to form two command files per node. The setup script (initialization commands) is to be executed prior to the emulation, the emulation only starts if all nodes finished their individual setup phase. The runtime script is given to a node-local daemon which executes the respective commands at the given time offsets. The scripts are deployed to the nodes at the beginning of the setup phase. The collective emulation starting time is determined by the emulation_lib on the gateway server after all nodes have finished their setup phases. Then the local daemon applications (cmdscheduler) on the nodes are given the start time at which they start issuing the commands of the runtime script. 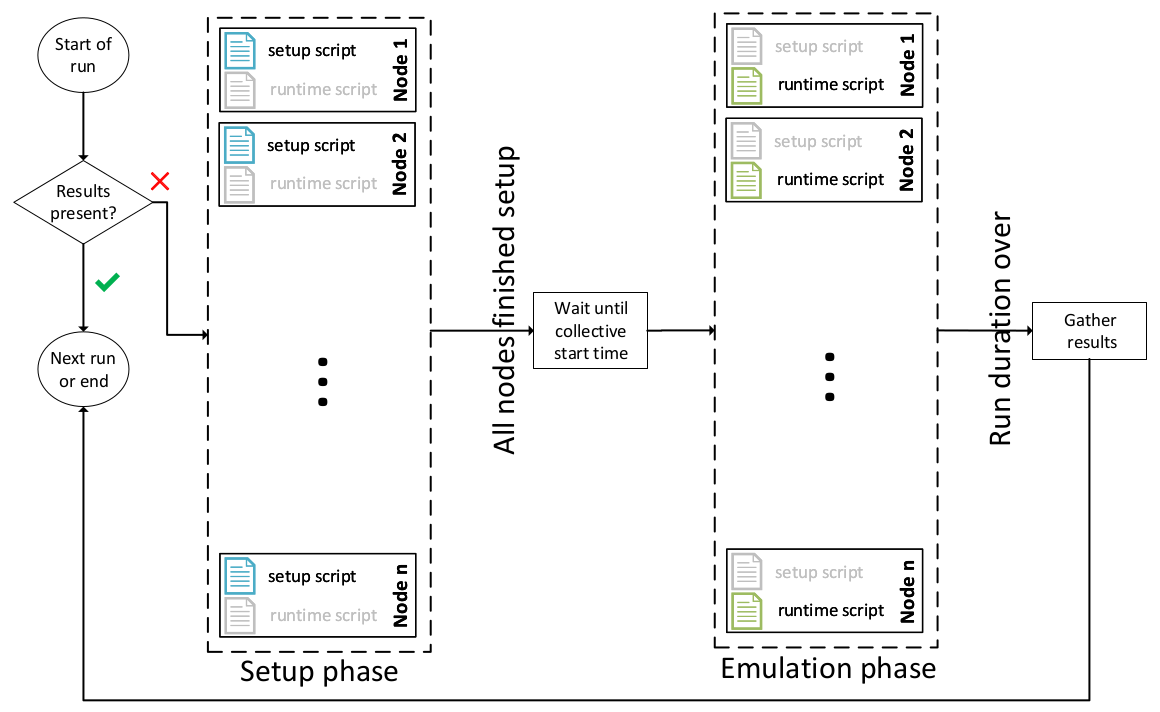 After an emulation run has ended (explicit definition of duration), the emulation framework gathers all expected result files from the nodes and places them in a predefined directory on the gateway server. Already completed runs are not performed a second time, which eases the process of performing many (possibly additional, possible re-) runs. The criterion for a run to be considered as completed is that all expected results (apps + user-defined ones) of a run are actually present (files present). This e.g. results in a re-run of emulation runs if a user is to add / change an expected result (by hand or adding / changing an application). Note that already (successfully) performed runs are not repeated, but the command creation process is still performed as to generate a list of expected results.

As there are two basic types of commands (“link commands” and “other commands”), there are two basic types of functional blocks.
Functional blocks concerning the creation to periodically change link properties take so called intermediate files and create commands using one of multiple link command backends. An intermediate file is an intermediate representation of link parameters at a certain point in time (offset from emulation start).

When commands are to be created, the intermediate representation is given to one of many backends, which creates the actual commands for changing the link properties. Only the first column in the intermediate file should always be the time offset relative to the start of the emulation, all other columns can differ (be custom in count, order and meaning), but must be supported by the chosen backend. This approach was chosen as to keep this aspect flexible because:

Following illustration shows a selection of ways to perform traffic shaping on wired links. Separating the bandwidth shaping from the emulation of delay/loss is the easiest way to achieve the wanted link characteristics, but requires for more (intermediary) nodes. Omitting intermediate nodes and shaping the bandwidth and delay/loss on the same node / at the same time requires more care regarding the configuration as to avoid adverse interactions in the so created “queuing-hierarchy”. Using Intermediate Functional Blocks (IFBs), incoming traffic can be shaped as well, which opens more possibilities to shape the traffic (to separate responsibilities). 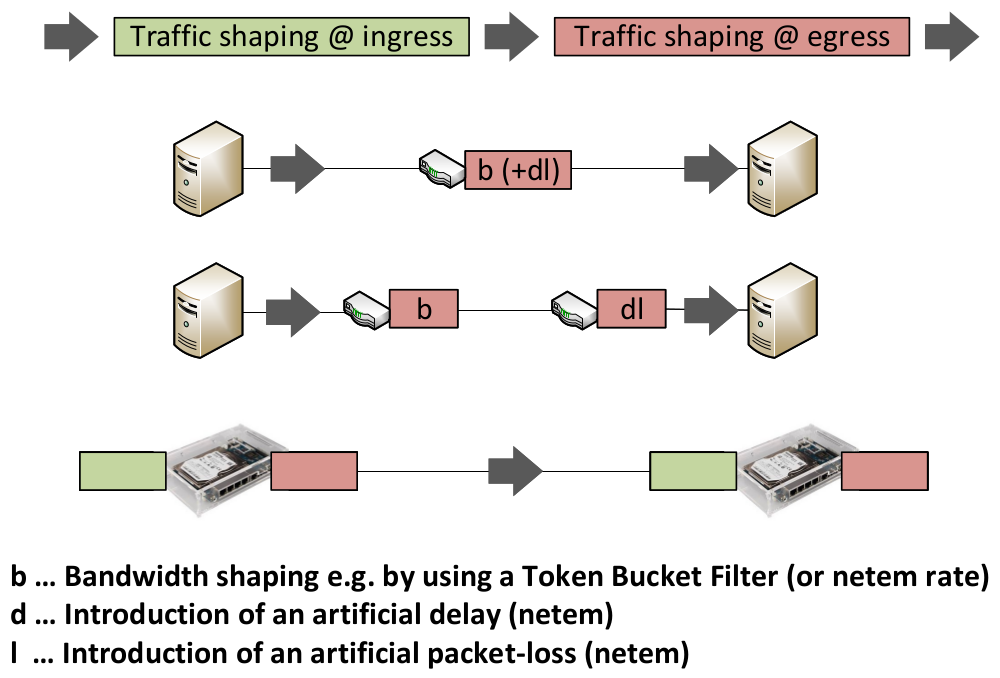 Some possible distributions of the traffic shaping responsibilities for a link are shown in the next image. A (link command) backend takes an intermediate file and creates commands to shape the traffic on the link according to a variation (there are for example backends for e.g. “b_”, “bdl_”, “b_dl”). Not all shown variations make sense / are practical. 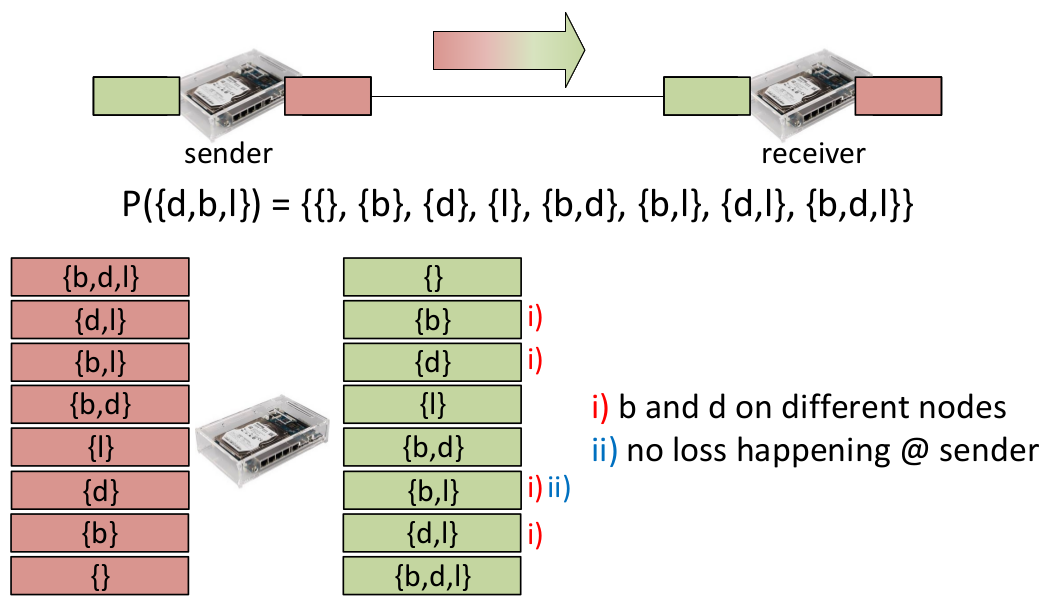 Functional blocks concerning the creation of “other events” are usually written by users and cover the life cycle of one or multiple applications on one or multiple nodes (e.g. start, stop, config files, result files). Like the blocks for link property emulation, these blocks usually need to be parameterized by the user. Additionally, the user has the means to schedule the execution of custom commands to be executed and results to be gathered without the need to write an application block.

Step 7: Have a look at a simple scenario file

The following is a commented example of a scenario file which covers a broad range of emulation_lib functionalities. It also utilizes a custom application as an example of how to create own application blocks.

Adapt the settings file example.config.py to fit your setup. This important for the emulation to work and to avoid getting “locked out” from the nodes as no management network connections are allowed except between the gateway and the nodes (nodes only “communicate” over the emulation network).

Now everything should be in place, lets try starting an emulation.

Alternatively, you can utilize the bash script start.sh to start the emulation.

During the course of the emulation, following directories and artifacts are created: